In a recent post on my Facebook group Spin In Style, it was claimed that my tops reflected the “many influences of different makers” and that one could “see wooden CDCs and DITs in there.” These are references to well-known top “brands” Chris Dean Customs and Dynamic Inertia Tops.

Every artist and craftsperson is influenced by other artists and the physical world around them, both consciously and subconsciously. Jonathan Jones, and art critic for The Guardian wrote in 2014:

“…any acquaintance with the Old Masters reveals that art has always been an exchange of ideas in which influence is not just omnipresent but proudly accepted. The story of art is largely a story of homages, remakes, rivalrous borrowings, nuanced imitations.”

As I have developed my craft of woodturning, making spin stations and spinning tops, I have reflected upon those things that have influenced me. My research identified strong influences from neo-classical design, in particular architecture. These influences are perfectly embodied in the design of the Staunton Chess set, used in all official tournaments and championships. Designed in 1849 by Nathaniel Cook an architect, these chess pieces have come to represent and embody neo-classical design.

As described in an article written for the Smithsonian Museum, Nathaniel Cook found influences in classical architectural elements from Roman and Greek civilizations.

Just as I have been influenced, knowingly or not, by these classical shapes, so have all artists, and the makers of spinning tops. Even if not acknowledged explicitly people such as Gavin Sexton (DIT), Joshua Dawson, Harold Edwards (Topped Out), Dee and Steve Aiena (Top Dawg), just to name a few, employ elements of classical design and the Staunton Chess pieces in their designs, particularly the stems. Stems are the most obvious part of a top to reflect classical columns and pillars.

It is not theft or plagiarism, intentional or otherwise, to make things that look like things that others make. It is quite natural to imitate, perfect, and build on ideas and designs from the past. All artists stand on the shoulders of those who have gone before. To the extent that designs by top makers have influenced me, so too have the designs of ancient Roman and Greek architects and artists influenced me, and influenced those top makers.

Here are some examples of tops made “under the influence of Staunton”. 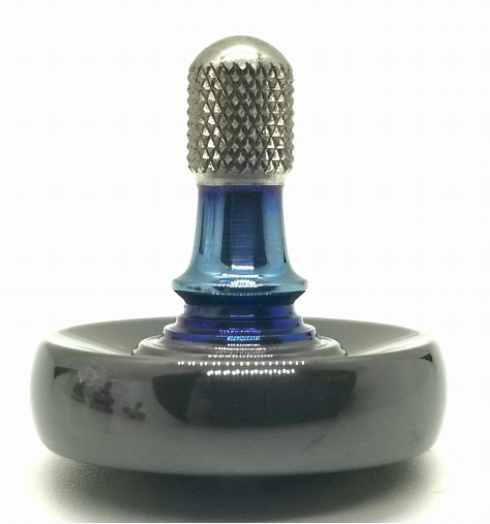